Ashton & Moore Ltd is repeatedly growing our suite of REACH compliant coatings, to aid demands for sustainability from customers in the Aerospace & Defence sectors.

We now offer Socomore TCS/PACS, the leading Alocrom 1200 replacement. Having installed a full-scale process line, firstly for Government funded HITEA and COLM projects run by the UK Aerospace Primes, we now have formal approval for two Primes, and are regularly processing flying parts for one of them. The TCS/PACS can be used, not only as a replacement for Alocrom 1200, but also as a chrome free seal for Thin Film Sulphuric Acid Anodising. Replacing the need for both these hexavalent chrome dependent processes and making the aerospace parts fully REACH compliant, whilst giving them the same level of endurance in service and allowing some areas to be highly conductive, as required. 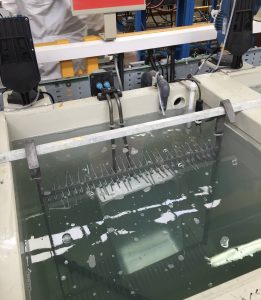